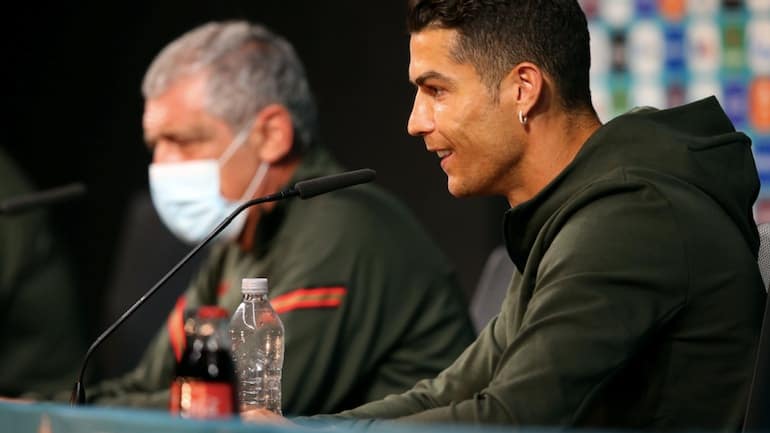 There are many times when one small act of action makes a huge difference in life. People look at each other for the answer of how a person has the courage to make a large change by just taking one tiny step.

This is what we witnessed when Christin Ronaldo – the world famous footballer took the bottle of Coca-Cola and kept aside of him saying to drink water. The intentions were not to hurt a brand but was only just to tell people what is right for them.

(Cristiano Ronaldo dos Santos Aveiro GOIH COMM is a Portuguese professional footballer who plays as a forward for Serie A club Juventus and captains the Portugal national team.)

This incident not just made a change in social media but also was a shock to the company because they lost a huge amount of money for that one single day. This clip is getting viral on social media and people are coming up with their unique versions. Users across the globe recreated the moment with various items, while Indians went ahead to find out the real reason why Ronaldo removed the coke bottle. From morphing Amrita Rao into the scene to passing the bottles to a person who needed to add Coca-Cola in their drinks, the internet is filled with such parody videos.

Everybody says that he could make it because now he is a rich and well know person where if the same was done by common man, the world would have taken that as a joke, I say that being a common is not easy to fight against something wrong but also huge to reach however I also believe that it takes more courage when you have a well known name in this world, where your actions matter to public. There is a time when a person needs to think about doing everything. As Ronaldo did not just make a crash in coca cola share market but also gave the courage to stand on your right even when the whole world is following it.